Naadam has its roots back in the days of the Khaans, with its origin in military parades, tests of strength and sporting competitions. It is now officially a commemoration of the 1921 revolution when Mongolia declared itself a free country. The manly sports have roots stretching back into antiquity, with the wrestling in particular having evidence of its taking place as far back as 7000 BC. It is likely that as far back as people have had domesticated horses and bows and arrows, they have competed with them.

There are three main events, with a few other things happening around them. These three are the traditional ‘manly sports’ of wrestling, archery and horse racing.

Wrestling
If all you know of wrestling is the staged American homoerotic nonsense, you’ll be glad to know that this traditional manly sport is nothing like that. Although it is still slightly homoerotic. For those who watched last man standing, you’ll know exactly what it’s like (and if you didn’t, you missed out).

The wrestling is held in the main stadium of Ulaanbaator, hosting crowds of up to 20,000. Only the opening and closing ceremonies cost money, but when I arrived, touts were selling tickets for roughly ten times their face value, so I decided to skip that and just wait for the events.

To see the opening ceremony that I missed, check out this youtube clip.

Traditional infantry waiting to enter the stadium for the opening ceremony

There were lots of them, so the ceremony must have been fairly impressive

Once I got into the stadium, I got to see the wrestling first hand. The uniform worn consists of a tiny pair of pants, boots, and a jacket that essentially consists of just sleeves. The wrestlers line up in two sections, waiting to enter the arena. When the judges are ready, two enter, and perform the eagle dance. This consists of prancing around in a circle, while flapping their arms.

The wrestlers waiting to enter the arena

This is pretty much the antithesis of what I would call manly, but then they wrestle. And it’s pretty brutal. There is no time limit, no arena to stay within, and seemingly no rules. The winner is the man who throws his opponent to the floor first.

The loser then stands dejected, as the winner eagle dances off around 20 paces, then returns and holds out his arm for the loser to pass under. This is a sign of reconciliation, and acceptance of superiority. The winner runs off to a golden podium covered in flags, then eagle dances around it before leaving the field. There are no weight classes, so the early rounds are often quite mismatched and quick, but the final few rounds can last for a long time, as the competitors are both very good by that point. The top ten levels are given honorific titles, with the winner being crowned arslan, or lion. As context, to hit this level, a wrestler has to come out on top of 1023 other competitors.

The stadium. I was too far away to take decent photos

Archery
The archery is held in a dedicated arena roughly a hundred meters away from the main Nadaam stadium. Unlike the wrestling, women are permitted to compete in this event, although they shoot from 65 meters, as opposed to 75 meters. 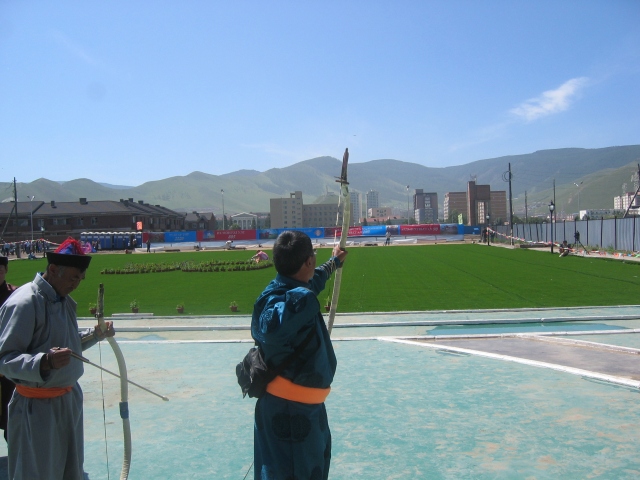 The target consists of a small wall of rings, around eight inches high, and four feet wide. At 75 meters, it looked like an extremely small target. Competitors are given four cork or rubber tipped arrows, and are expected to knock down at least thirty three rings, although the best will take down significantly more. It’s as well that they are soft tipped, as judges stand all around the targets to count up the totals, and restack the walls.

The bows are renowned for their military effectiveness, and are said to have an effective range of 500 meters. They are small, and made of a composite of wood, horn and sinew, bound together with animal glue. This gives them a huge amount of power. Even given their small size, they seem to be extremely hard to draw back. The arms of even the strongest looking men were shaking as they tried to aim. 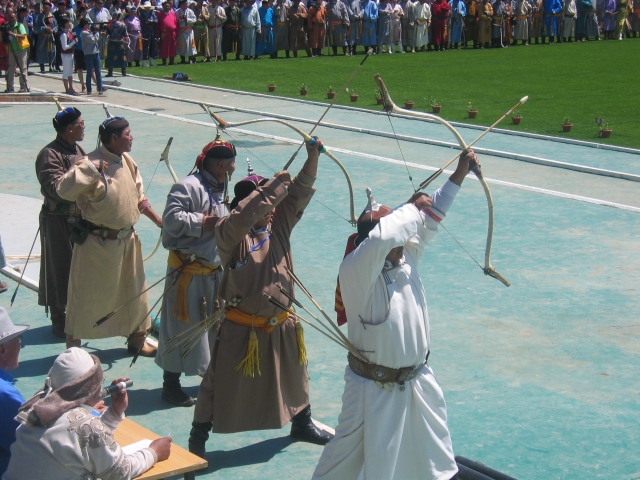 After an opening ceremony of drumming and a lot of Mongolian that I didn’t understand, and archers in traditional armour, the president of Mongolia stepped up to the firing line. He was given a bow, and the competitors stepped onto the field, forming a V around the target. Five shots, five misses. I was actually a little worried some of the competitors would be hit, but at least the arrows are blunt. 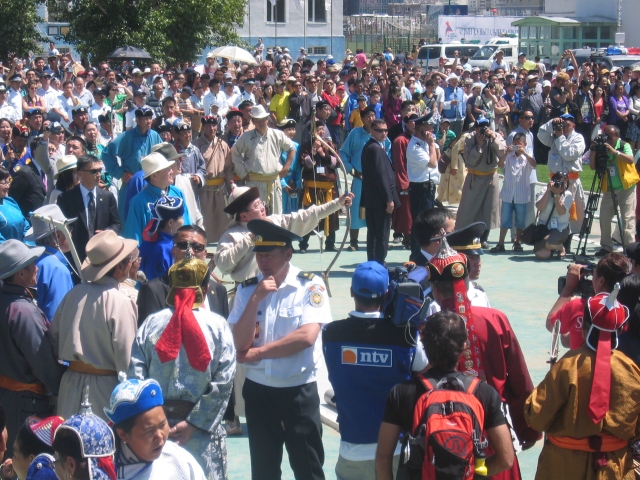 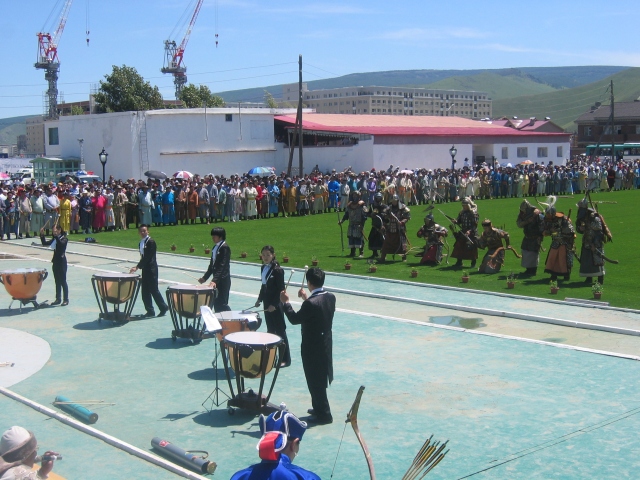 Horse Racing
Of all the events at Nadaam, the horse racing is the most impressive. It’s run by children from five to thirteen, over a cross-country course from between 15 and 30 kilometres, determined by age class. Up to a thousand horses run the races each year.

The second day of the festival, I took a bus with David and Reuben, a pair of Spaniards from my guesthouse to Khui Doloon Khodog, where the start and finish lines are. We left the outskirts of UB at half ten, and after a very crowded journey, got to the race course two and a half hours later. Mongolian traffic is something else. The motorway out-of-town was backed up almost the whole way, perhaps largely because to the Mongolian drivers, lanes are something for other people to worry about. There were cars literally at ninety degrees across the highway. Because of all this, the journey took about three times what it should have, and we managed to miss a lot of the event. In fact, we arrived just in time to catch the end of the last race. 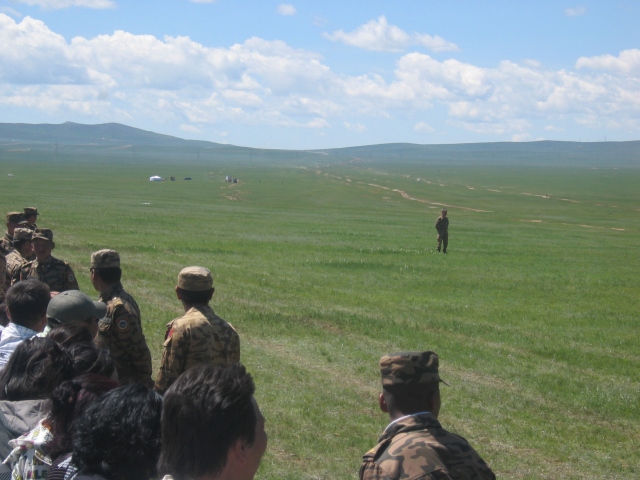 The end of the race was actually the most interesting part. Coming across the steppes, a cloud of dust rose up, heading straight towards us. After a few minutes, we could make out the frontrunners, and then they were upon us. We had been standing a few hundred meters from the finish line so we didn’t see who actually won. By the time the racers had covered the long course they had spread out hugely,  passing us for around five minutes, racing on to the end. There were many riderless horses, and the race is notorious for killing horses, and unhorsing the riders. Fortunately there were a few jeeps following along the course, I assume to pick up those that fall. Remember that these riders are as young as five years old, and you’ll see how crazy this event is.

The winners coming in

Some of the racers

After watching the riders come in, we wandered around the rest of the area. There had been a small village of traditional gers set up, what you will probably know as a yurt. They offered carnival style games, drinks, and food. We stopped off to get some lunch, and due to our lack of Mongolian, took a pot luck. It paid off, and we ended up with a quarter chicken each, on a bed of rice. With no cutlery. It was amazing. We were also given some ‘Mongolia juice’, which consisted of plum, apple, and unknown other fruits. 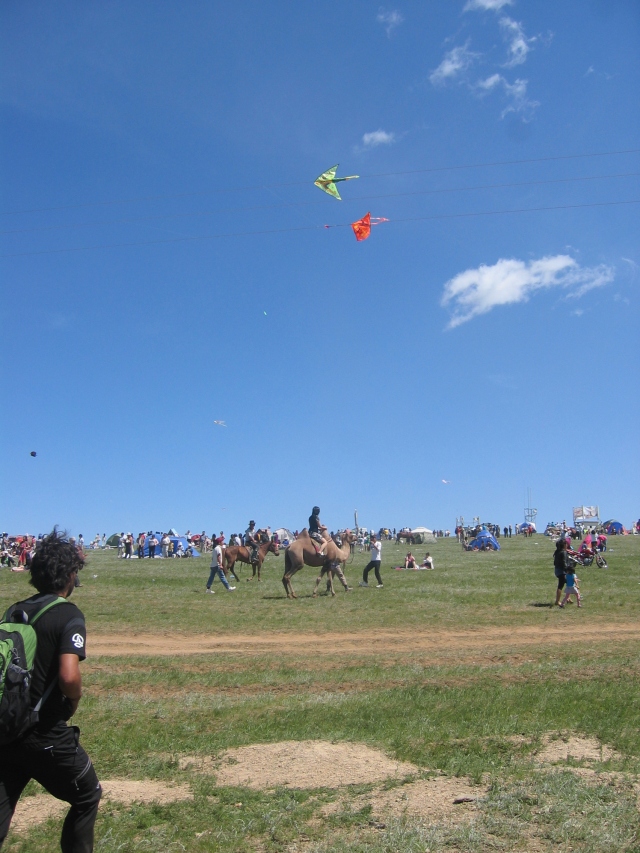 Kites in the power lines. Seemed pretty unsafe, but I didn't see anyone get electrocuted

After lunch, we wandered around some more, and ended up holding a Golden Eagle. It was an incredible creature. With a wingspan of something close to six feet, talons that easily could have ripped through the glove I was wearing and crushed my wrist, and a seriously vicious looking beak, it was pretty scary to be that close to the bird. I had to keep shaking my arm around so that the eagle couldn’t get a solid grip on my arm and use its talons.

What a cool animal 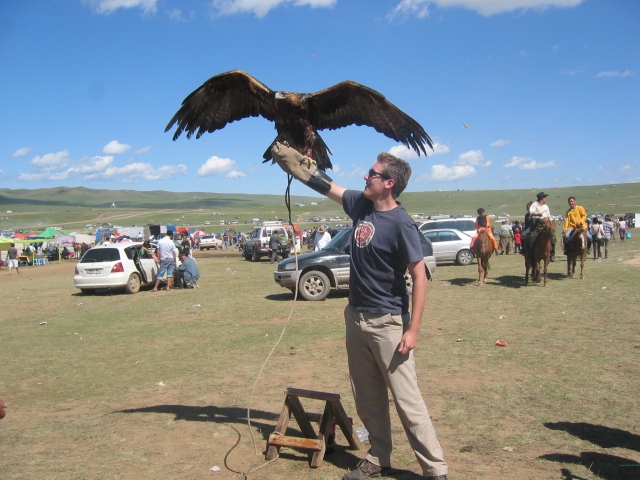 A highlight of the day was just seeing how the Mongolians treated their horses. They use them the same way we use a bicycle, truly comfortable on them. In a couple of places there were large TVs set up to show the wrestling back in UB, and these would all have a semicircle of guys sitting on their horses watching TV.

We couldn’t find the bus back, but fortunately we made friends with an Australian family who were heading back to the city. They offered us a lift back with them, so we took it. We all got on pretty well, so arranged to meet up for dinner that evening. They had been living in UB for six months for work, so knew some good places to eat. We ended up at BD’s Mongolian Barbecue, a slightly americanized take on a traditional bbq. You filled up a bowl with meat, veg and noodles, then they were fried on a giant hotplate with your choice of sauce. It was amazing, and Russell (the head of the family) paid for the vodkas.

Alternative Events
There are a number of other events surrounding the three major ones. One of the most fun is the shagai, or anklebones. This is played by flicking a sheep anklebone along a wooden board with your middle finger. It is aimed at a pair of anklebones placed upright around ten meters away. These are about the size of your thumb from knuckle to tip, so quite an impressive target at that range. In itself this isn’t that interesting, but the crowd around the participants chant and yodel, filling the tent with a cacophony of unique cheering.

The evening of the first day of the festival held a concert in Sukhbataar square. The first band I saw were a pretty good Mongolian rock group, who played fairly standard four piece rock, with a bizarre Mongolian singer. The second band were a couple of Americans playing acoustic guitars. They weren’t very good, so I left and went for dinner. Apparently I missed out on some cool traditional Mongolian music later on, but I did find a really good German style brewery, so it all evened out.

Leaving the bar, I was treated to the most impressive fireworks display I’ve ever seen. They were sent up from the stadium, around a kilometre from where I was standing, and took up a good eighth of the sky. Now, that doesn’t sound too large, but go outside and mentally split the sky up into eighths, and you’ll see that this was huge. They lasted for a full twenty minutes too. It was really incredible.

The other cool thing going on happened on the third day, a cultural exhibition held in Sukhbataar Square. There was a procession of traditional costumes from different regions and time periods.

The building behind them is the government. The big statue in the middle is Genghis Khaan 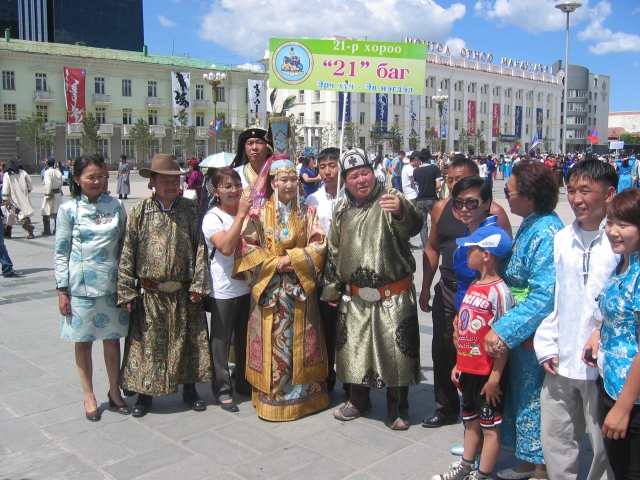 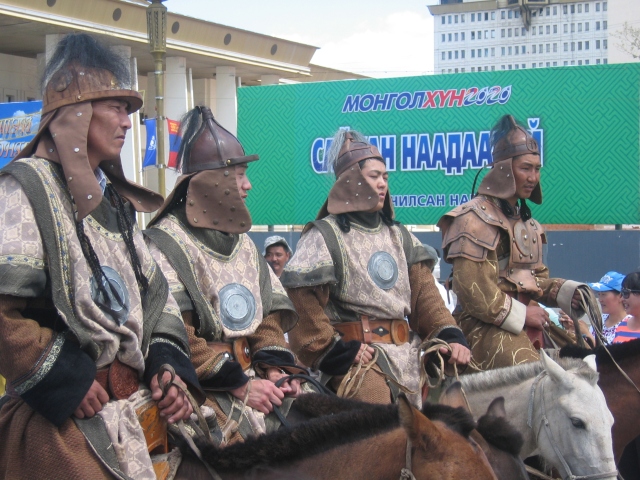 There was also traditional music, dances and living quarters. I visited a traditional ger when I visited Terelj national park, so I’ll write about that in the next post, which will be my last from Mongolia.